Booking ANA RTW Ticket is part of the ANA, Take Me ‘Round The World Trip Report.

TPOL is great at booking amazing trips. I’m just not as good finishing Trip Reports (see Writing Trip Reports: How Old Is Too Old?). The trick for Travel Guides, I’ve learned, is to write them with my Blackberry in real time and publish them later. There’s no urgency in writing those posts as what to eat, see, and drink in a city remains relatively the same. This can’t be said about posts about booking awards trips. What use is it to you, the reader, to write about my great US Air booking to Seychelles for 60k points? Thus, I’m posting the Booking ANA RTW Ticket guide right now. Let’s get to it:

Depending on the distance flown and the class selected, there are different mileage requirements. The best value is flying business class for greater than 20k but not more than 22k miles. That requires 125,000 ANA miles.

How to Get ANA Miles

I transferred 125k MRs and in a few days, the miles were reflected in my account. Note that ANA miles expire after 3 years from issuance and cannot be extended.

If there’s one drawback to ANA, it’s that you have to pay fuel surcharges depending on which airline you fly. The way to check how much fuel surcharges will be is to search on the Matrix. Many blogs say that ANA does not impose United surcharges, but they certainly do for trips to Europe.

In the ‘el cheapo’ days, I would be outraged if I had to pay one dollar in fuel surcharges and would try to use my Barclays Arrival card to offset such charges. Today, I don’t care and don’t have the time or desire to MS my way to a few hundreds in savings (see I’m Done with Manufactured Spending). Here, the fuel surcharges came out to $1022. Que desastre!

Via God Save the Points, here are the rules with my comments in bold: 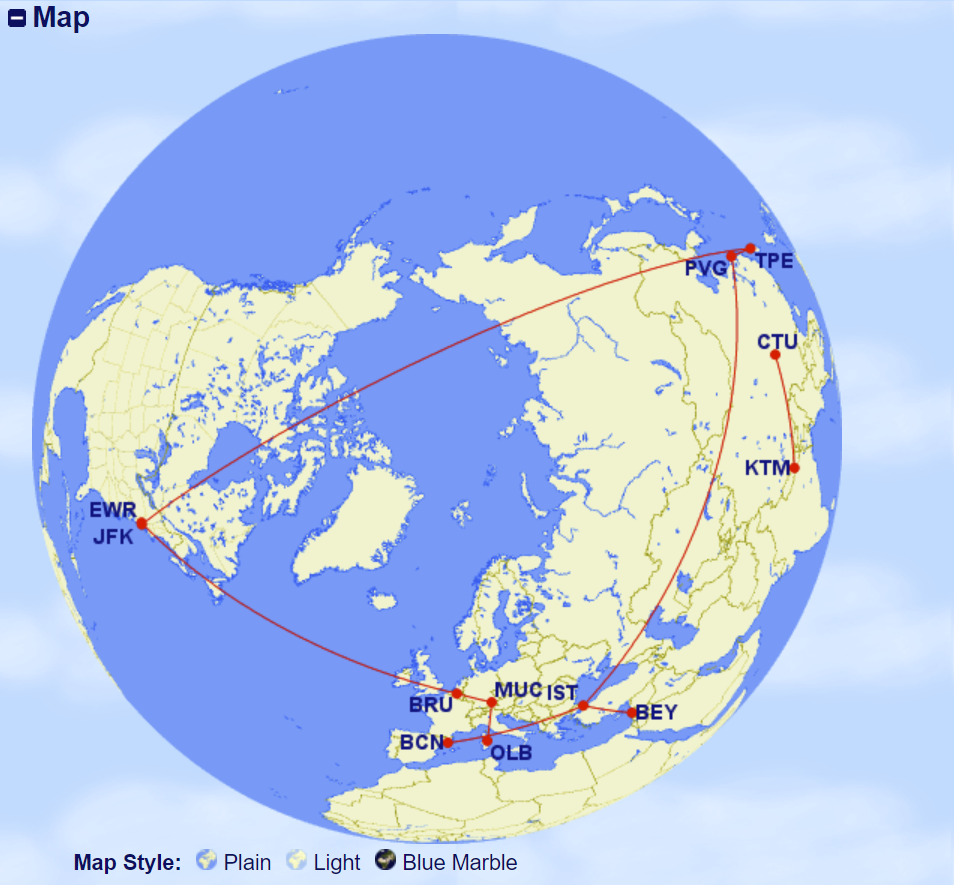 GCMAP is nice to look at, but where will TPOL be spending his time? My first stop is Sardinia, a new ‘country’ to add to my list (see Where I’ve Been and Is Hawaii a Country?). From there I go to Lebanon, a country in the traditional sense of the word that I have always wanted to see. #hummus After that I’m going to be living in Shanghai (see 再見 Puerto Rico, TPOL in Shanghai). While I’m in China I’m going back to Chengdu, this time to see the pandas, Nepal to detox, and Bhutan to find happiness. Then I’m off to New York for work and back to beautiful Puerto Rico for golf.

I used to get excited when I saw Lufthansa availability and would be annoyed when I saw United. Those days have changed. The reviews for Lufthansa business are underwhelming, while the reviews for real United Polaris are anything but. It took a lot of effort, but I found a Dreamliner 787 Polaris flight from EWR to BRU.

It’s easy, almost too easy, to book an ANA RTW ticket. Unlike most ticketing centers, the ANA representatives want you to feed them the flight numbers. And if something is not available, you don’t have to hang up and call back after you’ve figured it out. They help you find something else.

TPOL’s TIP: You have 72 hours to put your ticket on hold, but ANA will not guarantee that tickets will actually be there when you’re ready to book (see Award Booking OCD = Fortnite Addiction).

I wanted to get as close to 22k miles as possible. GCMAP says I topped out at 21,589, but ANA says I am at 21,879. I’ll go with ANA’s official mileage in measuring how close I came to squeezing every mile in business. I’m known for my beautiful spreadsheets. ANA is in blue. JetBlue is in green and the revenue ticket to BCN is in orange. The rest of the spreadsheet with hotels and other stops will be in an upcoming post.

I once wrote, Devaluation? I Laugh in the Face of Devaluation, and am happy to say, I still do. Maybe this points game will come to an end one day, but at this rate, I think I’ll be dead before that happens. #pointsnewdeal #tpol2020 #tpol2024

If you enjoyed Booking ANA RTW Ticket, read the entire ANA, Take Me ‘Round The World Trip Report.