Everyone has that only in Vegas story so I thought I would share mine.

The Knockout Bracket of where to stay in Vegas is supposed to review all the hotels that I have personally stayed at in Las Vegas. This posts deviates from that formula as I have never stayed an entire night at the Trump Hotel. Regardless, I am including it in the tourney because of the bizarre set of circumstances that led me there.

The party in Vegas clubs go on late into the night with after hours available for those that aren’t ready to call it just because the sun is about to rise. But, what happens if you are sick of all those glow sticks and are seeking an alternative party. Where do you go to satisfy that craving?

The answer is the Trump Hotel. I’m certainly breaking the tired slogan of what happens in Vegas by recounting the details of how I arrived at a lifestyles party. But, the hilarity of the evening makes it worth sharing. I was at Cosmo’s Marquee Nightclub when my friend and his girlfriend suggested that we ago to an after party. Without ascertaining the details of where we were going, I agreed to accompany them.

We arrived at the Trump Hotel, a building so ugly, so gaudy, no other casinos reside next to it. From there, we took the elevator the penthouse floor. My friend knocked on the door of what I later found out was the largest penthouse suite and a strange man answered. The man was unusually concerned as to why I lacked companionship and reluctantly let me in. Once inside, I noticed that everyone was being overly friendly with one another. It was a jovial group of folks who were very hands on.

As a serious travel blogger, I ignored the welcoming commune and made my way around the impressive suite. The pictures of the lavishly decorated bedrooms and beautiful showers which I usually post in my Hotel Reviews could not be documented given the circumstances. Muttering Fidelio over and over to myself, I found sanctuary in the sterile kitchen. The momentary respite immediately vanished and the nightmare continued. While pouring myself a stiff drink (no pun intended), I saw someone who looked familiar out of the corner of my eye. Could it be someone I knew that would blow my cover forever by revealing this shameful secret? Afraid to make direct contact, given that I had already seen too much, I sought solace by slamming my drink and pouring another.

Finally, curiosity got the best of me and I glanced over at the individual. Indeed, I did know who he was but he did not know me. Since things had already gotten weird enough, I decided to introduce myself  to this person before I made my hasty exit. Perhaps you too will recognize this individual: After that night, the significance of the expression it’s like watching a trainwreck took on a whole new meaning. Traumatized by Trump, I am relieved to say that this hotel has been knocked out. 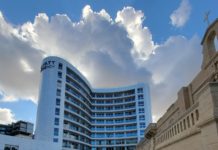